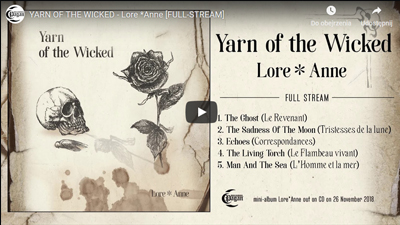 Yarn of the Wicked is a new project exploring the intersection of 60s-70s prog rock and 70s horror films. The debut EP Lore * Anne is out now in CD and digital formats and can be ordered via our webstore.

Lore * Anne is inspired by and dedicated to Anne de Boissy and Lore Fournier – the two main characters of the 1971 Joël Séria film Don't Deliver Us from Evil (original title: Mais ne nous délivrez pas du mal). All lyrics on the EP are from the poems of Charles Baudelaire; which Lore and Anne are fascinated by in the film. The EP draws inspiration from two scenes in particular; one where the female characters are reading Baudelaire’s ‘The Flowers of Evil’, and the other where they commit suicide by burning themselves alive, accompanied by Baudelaire’s poetry.

Yarn of the Wicked is a collaboration between multi-instrumentalist Evil (of Sauron fame, using a trio of names for this project: Rusty, Sherman, Tomson) and vocalist Yankes (Misanthropic Rage).

The Lore * Anne artwork and layout was completed by Anna Malarz. The album was mixed and mastered by Nihil (Furia, Morowe etc) at Czyściec Studio in 2018. The intros used in tracks 1,2,3 and the outro in track 4 are taken from the film, Don’t Deliver Us from Evil.

A video to the song “The Sadness Of The Moon (Tristesses de la Lune)” with footage from Don’t Deliver Us from Evil is available to watch here: