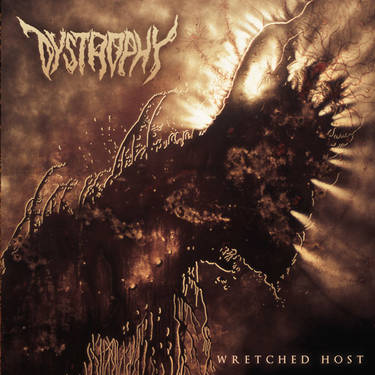 Like all the best aural descents into madness, this one has taken its time to ready itself for another level of technical insanity, but now on a much darker plane. It’s time for DYSTROPHY to showcase the latest step in evolution, their 2nd album "Wretched Host".

The album is bookended by two haunting pieces of violin work, provided by guest Ben Karas (AKA Valček) of Windfaerer and Thank You Scientist, while the meaty tracks in between boast of a dissonant, warped and twisted death metal. Downtuned riffs ring out among a maelstrom of rhythmic shifts, and guttural vocals intone tales of the experience of losing your mind, based on personal experiences.

"Wretched Host" was mixed by guitarist Peter Lloyd at One Stone Recording & Mastering in New Brunswick, NJ, in keeping with the band’s DIY ethic, and was mastered by Alan Douches (ATHEIST, DEATH, CANNIBAL CORPSE) at West West Side Music in New Windsor, NY.

A must have for fans of DEATH, GORGUTS, ATHEIST, VOIVOD, RIPPING CORPSE, HUMANS REMAINS, DEATHSPELL OMEGA and the likes.