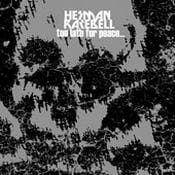 label: Selfmadegod Records
format: MCD 3"
year: 2006
country: Poland
genre: grindcore
Herman is dirty. Herman is rabid. Herman is raging with a will to destroy all in its path. "Too Late For Peace" contains 15 songs of old-school, ear blasting grind/crust, surging with maniacal speed and aggression. The disc also features three classic cover songs: "Rags To Rich's" from DOOM, "Multinational Corporations" and "Instinct Of Survival" from NAPALM DEATH, and contains members of THIRD DEGREE and ANTIGAMA. Herman Rarebell is perfect answer to good old fashioned grind/crust typical for bands like NAPALM DEATH, TERRORIZER, DOOM, REPULSION, DEFECATION, EXTREME NOISE TERROR. Additionally this is 3-inch disc release with excellent packaging. "Too Late For Peace" is the soundtrack to your suicide - get ready for the ultimate destruction. 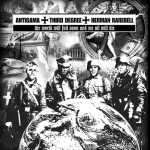 ANTIGAMA / THIRD DEGREE / HERMAN RAREBELL The World Will Fall Soon And We All Will Die CD
Price: €4.81