The highly anticipated debut album from Poland’s Ragehammer. Raw and satanic METAL in its most primitive form forged by the standards set by the Gods in Venom, Sodom, Impaled Nazarene or Bathory. Quoting the band, the album was created “with cold hatred of the modern world and contempt for the values of love and humanity”. This is not another album about beer, pizza and the 80s. This is WAR.

"The Hammer Doctrine" was recorded during the end of 2015 at No Solace Studio and was mixed and mastered by M. of Mgła fame. The full-length consists of eight original tracks along with a Polish rock cover of Krzysztof Klenczon i Trzy Korony, “Spotkanie z Diabłem” (translates to: “Meeting with the Devil”).

The album is released in standard jewelcase CD. Robert von Ritter (Outre, Bloodthirst, In Twilight’s Embrace) is responsible for the artwork while Kontamination Design (Blaze of Perdition, Bloodthirst, Voidhanger, etc.) took care of the graphic design of the rest of the album. 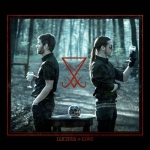 RAGEHAMMER Metal Against You T-SHIRT

RAGEHAMMER Metal Against You T-SHIRT
Price: €11.19