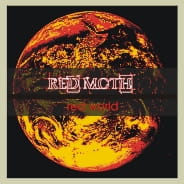 RED MOTH Red World
label: Beast of Prey
format: CD-R special packing, handmade
year: 2007
country: Poland
genere:  harsh noise
Debut album of Polish project RED MOTH. 35 minutes of harsh ride for extremal noise lovers. Devastation and chaos from experimental sounds to cruching waves, modulations and distortions. "Red World" is an album portraing frightfully chaotic development of Earth, men and their mad rush. Dictatorship of world awakens the need of money, profits, land or control above others. The heat of development in every genre of life leads also to social, cultural, emotional and spiritual vitiation. Project RED MOTH trough extremal sounds interpretates it's own observations of chaos on this earth. Unconventional release, raw cover cut in shape of cross from thick waste-paper cardboard. On front pasted a photo showing the cover of the album, and additional insert. The CD is mounted on plastic element. All folded in 15x15 cm square, wraped with special wire and foiled. The album is hand made and numered, limited to 150 copies.