The reissue the long out-of-print sole full-length from infamous Oakland-based crust/metal outfit STORMCROW has finally been released. The now defunct act stormed onto the scene in 2005 with the release of their debut and only full length, "Enslaved In Darkness", followed by a series of brutal split releases with SANCTUM, SKAVEN, MASSGRAVE, LAUDANUM and COFFINS over the next four years. This official worldwide reissue reintroduces the album's cruel AMEBIX-style crust infused with metallic riffs; a must-have for BOLT THROWER, AXEGRINDER, DEVIATED INSTINCT, and HELLSHOCK devotees. STORMCROW's ominous tone built of thunderous drums, chunky guitar rhythms, intricate time patterns, and intensely dark vocals have helped the band become a well-respected name within the crust and metal scenes. The release also features artwork done by Rob Middleton (DEVIATED INSTINCT) and was recorded by Greg Wilkinsen of BRAINOIL. 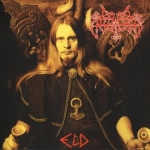 ENSLAVED Below The Lights CD

ENSLAVED Below The Lights CD
Price: €9.98

ENSLAVED Below The Lights LP

ENSLAVED Mardraum -Beyond The Within- LP

ENSLAVED Mardraum -Beyond The Within- LP
Price: €16.43

ENSLAVED Mardraum -Beyond The Within CD

ENSLAVED Mardraum -Beyond The Within CD
Price: €9.50