This amazing piece of history is presented in glorious 180g heavy vinyl in a 360g gatefold jacket, complete with original cover artwork and lyrics. Mastered for Vinyl by Haldor Grunberg at Satanic Audio.

VIOLENT DIRGE is an unadulterated and raw technical death metal band formed in 1987. Their sound was characterized by outstanding riffs, flailing solos and brutal vocals -  mandatory listening for any early 90's death metal fan, especially for fans of Atheist, Gorguts, Hellwitch and Sadus.

SIDE A:
1. Inapperception
2. Doomed to Unpractical Mind
3. The Lapse
4. Imaginary Imperfection
SIDE B:
5. Enlivening Damn
6. Leprous Sanctity
7. Pessimum
8. Oblivion 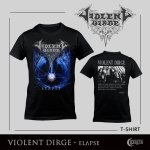 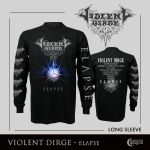